What follows is the second of a three-part series about negotiation. Part one, The Benefits of Early-Season Trade Talk, can be found here.

People are not all alike. Well depending on the baseline you use, we are all pretty similar anatomically and physiologically. While all humans use the hydrochloric acid in their stomachs in a similar fashion, we do not all use our brain, brawn, tongue, and trachea to negotiate the same. Knowing your own negotiation style and that of your leaguemates will help you to negotiate better. Each negotiation style is predisposed to certain trade mistakes in fantasy baseball. By knowing what we are predisposed to, we can hopefully more frequently avoid the following mistakes:

Agreeing to an unfavorable trade when you should stand pat

Furthermore, by knowing what our leaguemates are predisposed to, we can be wary of their strengths and take advantage of their weaknesses. You might be able to figure it out from the diagram or description, but the best way to know your own negotiation style is to take Thomas and Kilmann Conflict Mode Instrument (TKI) questionnaire, which you can take here for free. I usually prefer theory and concept to instruments and models, but the TKI does an excellent job of breaking down the negotiation spectrum into five categories, which allows for meaningful discussion and analysis. The five negotiation styles – competing, collaborating, compromising, accommodating, and avoiding – are mapped using two criteria:

1. Assertiveness: the extent to which the individual attempts to satisfy his or her own concern

2. Cooperativeness: the extent to which the individual attempts to satisfy the other’s concerns 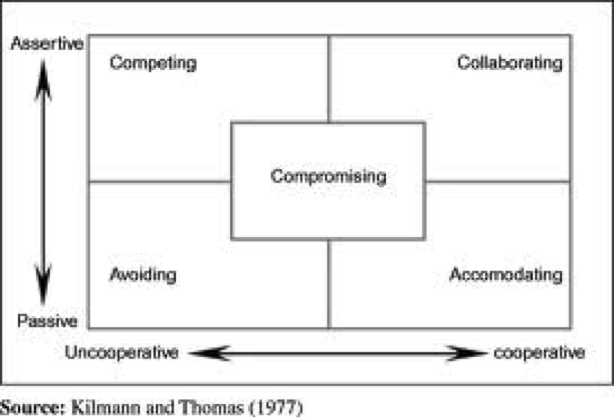 While the nature of fantasy baseball suggests that we should all be solely focused on self-interest, the truth is that there is much to be gained by being able to creatively meet the concerns of our leaguemates (allowing us to make beneficial trades more frequently). Some negotiation styles are more suited for fantasy baseball than others, but each has its own strengths and weaknesses as it relates to our game. We will now look at each style’s strengths and weaknesses, advice for those that possess that style, and advice if you are negotiating with someone who possesses that style.

Competing: High on assertiveness, low on cooperativeness. Only interest is self-interest.

Advantages: Wins trades and rarely makes unfavorable trades. Takes advantage of the cooperativeness and eagerness of others (those who are collaborating and, more so, accommodating).

If you are competing: You are in good shape as the nature of our game is designed to win, and that is what you naturally strive to do. That said, there is more profit to be gained if you do not commit to winning every single battle. An even trade (I am not advocating losing trades) can often be just as beneficial to reaching your goals as a lopsided trade. If you start to feel stuck because there are no good (lopsided) trades available, try looking at the needs of your opponents to find mutually beneficial trades.

Negotiating with competing– Keep your guard up because the competing types are interested in winning trades; thus, the other end of the trade is often not an optimal one. Unless there is valuation asymmetry (you think player X is better than player Y and the other owner thinks the opposite), negotiating with competing owners is often a losing game. You cannot avoid competing owners all together, but do not bend over backwards to meet their needs because they will not do the same for you.

Collaborating: High on assertiveness, high on cooperativeness. Interested in fulfilling the needs of everyone, including themselves.

Advantages: Works at and takes the time to make mutually beneficial trades. Gets the most for what they are giving up.

If you are collaborating: In theory, you are in good shape. You will not miss out on beneficial trades because of your high cooperativeness, but you will not be taken advantage of because of your high assertiveness. However, you will tend to let great get in the way of good, while other owners will look elsewhere when time is a factor; thus, collaborators will often be standing on the sidelines, while other owners benefit from the merely good trades.

Compromising: Medium on assertiveness, medium on cooperativeness. Interested in fairness; if they give something up, they expect something back.

Advantages: Can make trades quickly because they do not get caught up in a perfect trade. Does not miss out on too many opportunities.

Disadvantages: Tendency to settle on the obvious trade. Usually settles on a “fair” deal, but could have given up less or gotten more.

If you are compromising: You will do just fine, but you can do better if you strive for the best possible deal rather than a fair or defensible deal.

Negotiating with compromising: They are fairly easy to cut a deal with so long as you are not trying to get one over on them. Having lesser, often meaningless pieces (an extra 3rd round minor league pick for example) to use as bartering pieces can be an effective strategy to make the trade seem more fair to compromising owners.

Accommodating: Low on assertiveness, high on cooperativeness. Interested in meeting the needs of others, often at the expense of their own needs.

Disadvantages: Agrees to trades when they should stand pat, does not get as much in trades as they should, and will be taken advantage of by more self-interested owners.

Negotiating with accommodating: These are the folks that you want to negotiate with. Fantasy baseball owners are a self-selecting group; thus, there are not many accommodating owners out there. If you do find one, you want to make sure that you do not fleece the owner too badly because you want to keep that trade route open for as long as possible.

Avoiding: Low on assertiveness, low on cooperativeness. Not very interested in negotiation.

Advantages: Does not make disadvantageous trades because they will rarely make trades.

Disadvantages: Loses out on all the benefits of trading because they will rarely make trades.

If you are avoiding: you prefer to stand pat rather than taking on the risk of making a trade. This can be hard to understand for the other owners in your league and they will occasionally show frustration when they view you as an obvious trade partner.

Negotiating with avoiding: Good luck. Once in a while you will send them an offer and they will accept, usually with no negotiation involved. Because avoiding owners will not engage in trade talk, there is no real point in trying to anchor the negotiation. Consequently, make sure the offers you send them are ready to ship.

Knowing our own negotiation style and that of our leaguemates will be helpful for fantasy baseball trade negotiations, but this knowledge is certainly not the be-all end-all; in fact, it is more of a starting point. I may have the most in-depth knowledge of TKI of anyone in my leagues, but I am certainly not the best (or close to the best) at negotiation. To be the best at negotiation, you need a lot of experience negotiating; you need experience figuring out what works and what does not work. The true benefit of understanding negotiation styles is that it can help speed up this learning curve. By understanding why some tactics work with some people and not with others we can get better at negotiation little by little without solely relying on trial by fire.

Should I offer Adam Jones for prince fielder?
Reply to grandslam28